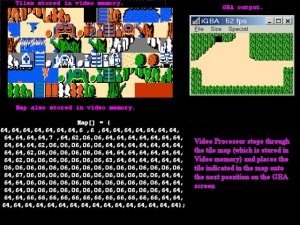 Most GBA games don't actually use any of the bitmap modes. Unless you're going to port Doom or do some vector games, the bitmap modes are pretty useless. GBA games get their responsiveness by using hardware-based tile modes. In these modes we can load up some tiled graphics into one part of video memory, and the tile map into another and let the GBA draw the rest. Think of this as the same as palette mode 4, except instead of each pixel as an index to a color, each tile is an index to an 8x8 bitmap.

TileMax is a GBA tile editor written in Java. With TileMax we can load a bitmap, generate tiles, and export some C files. There isn't any documentation, nor much information about it at all. I suspect that TileMax was intended as a professional product, but was abandoned at some point and the source was released. This aside, it's a pretty straightforward tool.

The easiest way to load bitmaps is to turn them into code and then use memcpy to shove them into video memory.