There are a number of satellites orbiting the earth equipped with amateur radio transceivers and digital modems. These satellites can act as enormous conference rooms for far-flung amateur radio operators and store messages in their digital mailboxes for later retrieval as the satellite travels around the earth.

Depending on the satellite and mode of communication (digital or voice, the modulation and frequencies involved, and the satellite's orbit) operating a satellite may be possible with handheld equipment. Some setups involve more elaborate equipment, including large automatically guided antennas, high power transmitters, and modulation schemes such as single sideband.

Successfully making contacts through an amateur satellite remains a badge of skill in the amateur radio community - your way of showing that you can wrangle your electronic emissions over vast distances and hit small targets many miles above the earth while squeezing your transmission in between aggressive competing operators. 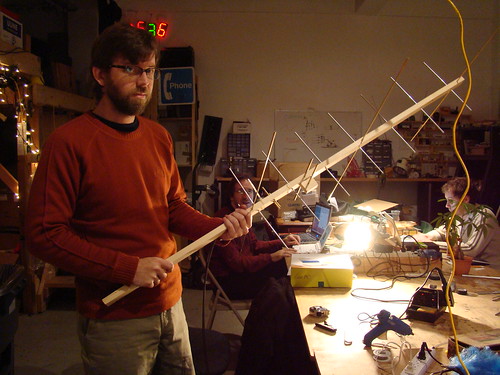 Dave Clausen with a 2m/70cm Yagi

Back to Ham Radio