The 2013 Open Hardware Summit was in Cambridge at MIT's Kresge auditorium. The attendees were as awesome as ever, and the line up of speakers was right on stupendous. Better than everything was the badge - a programmable repaper [1] display. To make it easy to get started hacking, the Wyolum folks wrote a utility program called Wifit (rhymes with Whip It) that let's you do a hello-world pretty fast on the badge.

Alas, installation instructions were provided for Linux and WIndows, but I carried a MacBook Air. I got real-close-now during the first block of speakers, but the MIT guest network blocked rsync (argh!). Finally home now, here are quick instructions for anyone attending OHS2013 who is Mac-limited. 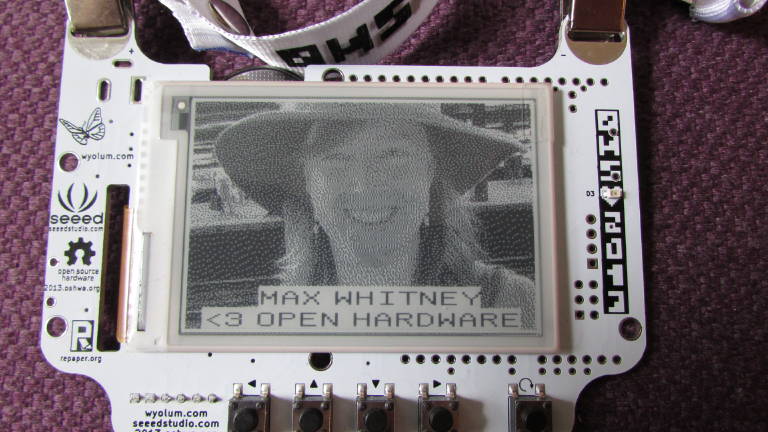 (2) Install the numpy and PIL libraries. MacPort takes care of the dependencies which is very sweet.

(3) Download and unzip the wifit code [3]. Change into the directory and call the wifit program from the command line. It'll open up an interactive window.

I didn't want to remap my default python in order to play with my badge, so I call "python2.7" If you want to make the MacPort 2.7 the default do this:

(4) Follow the Wyolum instructions for using their awesome tool.[4]