The Laser has a couple of different modes you can set it to, with "Basic" being the most common, since it is used for cutting and normal etching. However, there are some fancier modes that you can switch to, with "3D" being one of them. As the name implies, it will engrave not only on the XY direction, but also Z. It achieves this by adjusting the power as it etches, creating a 3D effect. This opens up a lot of possibilities!

Before you prepare your project and send it to the laser, it's useful to know how this mode works internally so you can design accordingly. 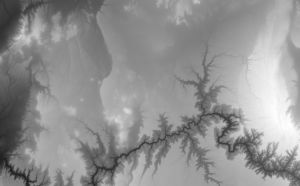 Grand Canyon (in black) would be engraved all the way; the highest peaks (in white) would not get engraved at all.

3D mode is very similar to the basic raster mode, but instead of dithering images to give the effect of lighter or darker colors, it will use that brightness to determine how much power to use in that area. So, essentially, darker colors means more power, which means the groove will be deeper. A black pixel will be engraved at full power; a white pixel will be left untouched.

Now that you know how the 3D mode operates, it's time to set up your project!

Unlike what you are probably used to, it is unwise to set your document size equal to the laser bed's size, since in the 3D mode, the laser takes into account everything you send it, including totally white areas (it will just attempt to cut them at zero power). (TK: check if making the document transparent fixes this?) Instead, make your document size roughly equal to the thing you are going to be etching.

If you want to follow along, or just want to check out an example before starting on your own project, you can download this 4x4" sample file which includes a couple different gradients, so you can see how they turn out on the laser. (download: Media:3d_gradients.svg)

We will be using this example file to simplify things. If you are using your own project, just replace the appropriate values where necessary.

Once you have set up your project as described above, we can move on to setting up the laser with the appropriate settings to get a 3D etch.

Once you've followed the steps above, making sure to save the settings, you are ready to print! Send the job as usual, and if it does not end up as a 5-hour job, you probably did it correctly! It may be a good idea to perform a dry run by lifting the hood and then pressing "GO", to make sure it's doing what you want it to.

If you want to explore 3D mode a bit more and see Epilog's official guidance on it, check out their manual — CTRL+F for the "3D Engraving" section (should be on pg 171 of the PDF itself).