An LED to alert you to unread e-mails! 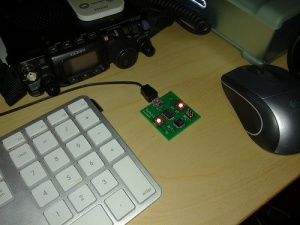 The E-Mail Waiting Light is there to remind you that you have not reached INBOX ZERO! A blood red reminder of your shortcoming as an elite e-mail warrior, unable to filter your way out of a torrent of new and unwanted attention sucking diatribes from the ether!

The E-Mail Waiting Light is a simple Python script that, when run, will enable you to signal to a serial port device that you have mail, or that you have reached INBOX ZERO, in which case you should probably get out of the basement and meet more people. - wwward

The script employs the IMAP module to retrieve all the mail in the INBOX folder, looking for "UNSEEN" flags. The count of those messages is stored to a variable. If the variable is not zero, the script uses the PySerial module to write a string to the serial port. The SLED uses simple RGB values to represent LED colors. In this case, the script sets the color to RED, and off when all mail has been read.

Questions or comments should be directed to [email protected]